At the heart of many of the things we've created lies Photoshop. It's an amazing program that allows you to manipulate digital media. From Greeting Cards to Pop Prints to posters and many other projects, here you'll find some of the most interesting (and sometimes disturbing) images that have been created.
The picture above is a good example. Three lovely 'broads' ready to hit Miami beach with their boogie boards. Surfs up, girls! 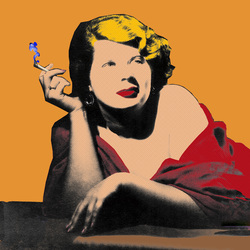 Jane Marks (Platt) circa 1948
POP PRINTS
I've always been a fan of Andy Warhol and when I saw a tutorial on how to create them using Photoshop, I had to try my hand.
At the end of her high school year, my Mom had some rather provocative 'glamor shots' taken. They were in black & white and this one made a great Pop Art print. 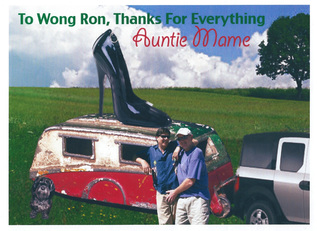 Here's an early classic circa 2007. Ron has had this crazy desire to buy an RV and travel the country when we both retire. I couldn't help but think what a crazy adventure that would be. Of course, the composition is from the famous gay themed movie "To Wong Foo, Thanks for Everything! Julie Newmar".  The toy trailer in the picture was a vintage toy Ron played with as a kid that was sent by Cousin June for Christmas one year. Our beloved Beardsley is there as is our Honda Element. The shoe, well, I won't tell you whose closet that came from. 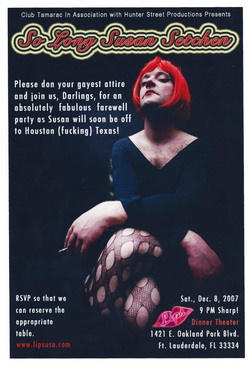 In 2007 our straight (but gay friendly) friend Susan Setchen was planning to leave our area to live in Houston near her daughter. We had a going away party at our favorite local Drag Club, LIPS.
Here's the invitation we sent for the event. 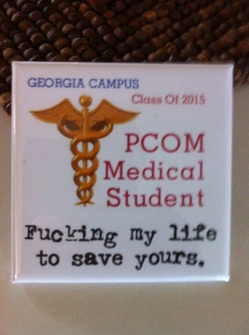 Ok. Ok. We get it! Medical School is difficult.
Here's a button we designed for our Niece, Anna, who is sacrificing a lot to, as she puts it, save us!
We appreciate your sacrifices, Anna, and can't wait to see what expensive car you'll be driving to save us. Oh, yea, once you pay off those exorbitant school loans.

During our first RSVP Gay Caribbean Cruise in 2013, Carrie Fisher (Star Wars) was a 'surprise' guest and scheduled to do two shows on the main stage the last day of the cruise. The first show bombed, big time, and rumors were flying all over the ship. They canceled the second show. Turns out she's bipolar and was having an 'episode'. Our good friend Karl read the situation and comforted Her during the ordeal. Here's a greeting card I sent to Karl after we returned.

In July of 2012, we had a very big 100th birthday celebration for Ron's dad. Here's the logo for that party which was plastered everywhere. Invitations, napkins, flags, buttons and even custom printed golf balls were adorned with his picture. It was quite a celebration held at the Nineteenth Hole Clubhouse in his community. Those who attended will not soon forget his entrance to the party in a decorated Golf Cart escorted by music (I Did It My Way) and flanked by two Las Vegas showgirls. 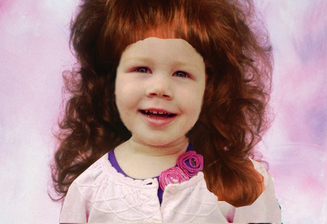 My young niece, Scarlet, has a beautiful head of red hair. But I'm alway's complaining that she needs to see a good (preferably gay) hair stylist. I did this 'Peg Bundy' look to try and get her Mother's attention. It worked. 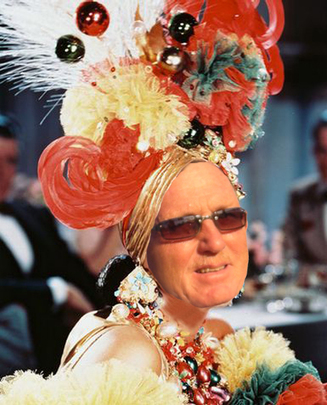 Ladies and Gentlemen, may I present the fabulous
Carmen Mironda!
This Website is made possible by a generous grant from the
Ronald H. Seitz Foundation